Interview of me done by fellow author Dan Andriacco 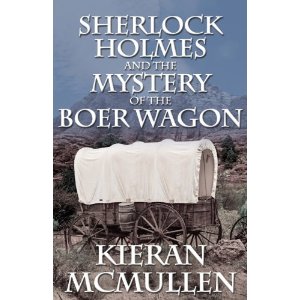 The Mystery of the Irish Author

In writing my mystery novels, I often tap into the police and firearms knowledge of my Kieran McMullan. He is simply amazing. Once when I asked him a question about bullets, he fired the weapon in question in his basement shooting range so he could give me an accurate answer! I think it was for the same book but a different questions that he once sent me a photograph of a bullet via Facebook.
That kind of knowledge and attention to detail is on display in Kieran’s own fiction. He is the author of Watson’s Afghan Adventure and Sherlock Holmes and the Irish Rebels.Now comes Sherlock Holmes and the Mystery of the Boer Wagon. I asked him questions about it — and got some enlightening answers.

What’s a nice Irishman like you doing writing about a couple of English guys?
Good question. Curious, isn’t it? But the answer is the same as for all the folks that follow the Great Detective and the Good Doctor. It is the appeal of the rational man tempered by the feeling man. Doyle’s (an Irishman by heritage) creations are the men we want to be, what we strive to be, their appeal is universal. They lend themselves to action, mystery, adventure and romance. Who could ask for more?
Your first book was Watson’s Afghan Adventure. Your blog is The Many Watsons. What’s the attraction of Dr. Watson for you?
Watson is the everyman, he is the one that I can identify with most closely. Who can really think themselves to be Holmes? Who really thinks they are the rational man? I know I’m not. But I do identify with taking action in a crisis or seeking the help of others. I could be Watson. Holmes, never!
Have you finally exhausted all the Watsons on your blog?
No, I haven’t. While there are 50-some currently at the blog https://kieranmcmullen.com/ there are more to be reviewed. You might like to know that there will be a book version of the blog from MXPublishing this Fall. All proceeds from the book are being donated to the effort to save Undershaw, Sir Arthur’s home.
When did you become a Sherlockian?
I became a Holmes fan at the age of eight. My Dad taught English and Russian literature at St. John’s University in New York. One summer he handed me the complete stories of the canon and said “Here, read this over the summer.” I was hooked from then on.
How did you come to write and sell your first book?
Actually, my first book was about how to care for artillery team horses in the field during Civil War reenactments. It sold fairly well but is a very specialized topic. But Watson’s Afghan Adventure had been something that was brewing for years. Who was Watson? Where was he from? Aside from his parents and brother being dead, what did we know about him, his childhood and his decision to join the army. What really made me curious was his claim to be with the 5th Northumberland Fusiliers (who were in the 2nd Afghan War) but he was wounded in Maiwand. Maiwand is hundreds of miles from where the 5th Northumberland served. And where was Watson wounded? Leg, shoulder, both? All these questions needed answers.
Your books all have a solid grounding in history, more than just being set in the late nineteenth or early twentieth century. Is history a particular interest of yours?
I’ve always been a history buff. I’m of the considered opinion that I don’t have to make all my own mistakes, I can learn from those that have already been made by others. I like to know more than just events. I like to know how things worked and why things were done in certain ways. Why do the cannons go to the right of a line of infantry? Why did Custer split his force into four parts? Why did the leader of the Irish Citizen Army agree to an uprising with the Irish Volunteers? Why don’t people know the difference between a hansom cab and a growler? If every car in the city today was once a horse and carriage, where were they all kept and fed and cared for? Every day I realize how much I don’t know and want to know more.
What kind of research do you do?
After I determine the location, time frame and general outline of the story I start to work on the particulars. Not just of a particular event, but of the surroundings. If I were in Dublin in 1916 what would I see, how would I travel, how would I eat? I try to make the surroundings as real as possible. Who is there? In all three of my Holmes and Watson books the majority of characters are real and were in those places at those times and Holmes and Watson could well have interacted with them. One difficult part is limiting the surroundings. For example, we know a tremendous amount about the Battle of Maiwand, but what would Watson have known? He was there yes, but his knowledge was limited by hillsides, smoke and the fog of war. I try to rely almost entirely on contemporary accounts. My bookshelves are filled with late 19th century, early 20th century books. If I write a description of Cecil’s Hotel in London in 1900 for Sherlock Holmes and the Mystery of the Boer Wagon, I have used references like Beavan’s Imperial London written in 1901. I know there are lots of people who like to knit-pick.
You have a varied background as a retired army officer and a retired peace officer. Does that come in handy in your writing?
It really does. It gives me a good basis for understanding how people interact, how people react in stressful situations, and how the best plan never survives the first bullet.
What’s next from the computer of Kieran McMullan?
Another excellent question! My wife is convinced that Holmes and Watson were somehow involved in the Boxer Rebellion. But since they were in South Africa at the time I haven’t quite worked that out. Besides, Charlton Heston and David Niven had that particular problem under control. Perhaps, as old men, Holmes and Watson worked with a young Constable Chan? Could be.
What haven’t I asked you that I should?

When will Sherlock Holmes and the Mystery of the Boer Wagonbe out? Glad you asked! 24 October.