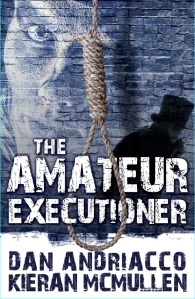 „There is the possibility of a Fenian attack also in The Amateur Executioner: Enoch Hale Meets Sherlock Holmes, the first collaboration between Dan Andriacco and Kieran McMullen (MX; £7.99). Hale, a native Bostonian, is a reporter for London’s Central News Syndicate – where, in 1920, Horace Harker is still a familiar figure, though far from revered. It becomes evident that the apparent suicide of a Music Hall artiste was only the first of a series of murders by hanging. Hale’s determination to find the link between the victims is variously helped and hindered by a cast of remarkable characters that includes his friend TS Eliot, WB Yeats, Bernard Shaw, Ezra Pound, Alfred Hitchcock and Winston Churchill – not to mention Chief Inspector Wiggins and Sherlock Holmes. In contrast to most tales involving Holmes, The Amateur Executioner takes us into an ambiguous and murky world where right and wrong aren’t always distinguishable. I look forward to reading more about Enoch Hale.”

The Amateur Executioner is available from all good bookstores including in the USA Amazon, Barnes and Noble, in the UK Amazon, Waterstones, and for everywhere else Book Depository who offer free worldwide delivery. In ebook format there is Kindle, iPad and Kobo.

This entry was posted in Uncategorized. Bookmark the permalink.

1 Response to Review of Amateur Executioner by Sherlock Holmes Society