The Many Watsons – Dudley Moore

I am almost at a loss as to how to review the performance of the main characters in the 1978 movie The Hound of the Baskervilles with Peter Cook as Holmes and Dudley Moore as Watson. I understand conceptually that the movie is a farce. The problem is that it is a farce of a farce, if you follow. You almost have to see it to understand how bad it is. It does have some funny moments (like when Moore, playing a one legged man) tries to get hired by Holmes as a message runner. I know, this is confusing to me too. Moore plays three parts: Watson, the one legged man, and Holmes’s mother Ada. 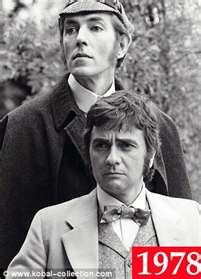 There are a number of good character actors in the movie: Terry-Thomas as Dr. Mortimer, Denholm Elliott as Stapleton, Kenneth Williams as Sir Henry and Spike Milligan as a policeman. But with all the talent the movie never comes together. The basic plot of the story of the hound is followed (a big fluffy Irish Wolfhound, my wife and I raised them for years and we still have two. They are giant pussy cats!). But there are side trips to Holmes’s mother and a massage parlor as well as a piece from the exorcist. It is quite a Hodge-podge of skits. Moore is actually pretty good as Ada Holmes and as the one legged man, his Watson however, is incredibly bad. I’m not a language expert, since I only speak Oklahoman of late with a New York accent, but it sounds like Moore is doing a Welshman with a Scottish Burr. The accent is actually distracting. It’s actually a shame that the movie has tremendous potential as a comedy and falls so flat.

Dudley Moore was born in Essex, England on 19 April 1935. In growing up he won a scholarship to Magdalen College, Oxford to study organ and upon graduation in 1958 he was offered a position at Kings College, Cambridge. His true calling though appeared to be jazz piano and the theater. He entered the theater with a bang in the satirical comedy revue “Beyond the Fringe”. Also in the revue was comic actor Peter Cook who would become Moore’s long-time partner. “Beyond the Fringe” would take Moore to Broadway where he received his first Tony Award. By 1965 Moore and Cook had broken into TV with a show called “Not Only…But Also”. In 1966  Moore was in the movies with “The Wrong Box” followed by “Bedazzled” and in 1974 he won his second Tony with the show “Good Night”.

In the mid 70’s there was a series of three comedy record albums with Cook which were a little over the top and were done completely ad lib. They were not well received in all quarters.  Probably Moore is best known for his acting in the two blockbuster hits “10” and “Arthur”. These seem to be the high points of his career.

In 1999 Moore was diagnosed with supra-nuclear palsy, for which no cure was known. In 2001 he traveled to London and received the CBE (Commander of the Order of the British Empire) even while confined to a wheelchair. He died 27 March 2002 in New Jersey. He passes on the same day as Milton Berle and Billy Wilder. Moore had been married four times and had two children.