“Eliminate the Impossible” by Alistair Duncan falls in the category of Sherlockian reference work. It is an excellent first reference work for those who have recently discovered the “Great Detective” and are about to test the waters of becoming a true “Sherlockian”.  Mr. Duncan provides the reader with a synopsis of each of the original Doyle stories (the “Canon”) and provides an insight into some of the commonly deduced anomalies within each.

I believe it’s fair to say that Mr. Duncan is a devotee of Dakin and agrees with most of Dakin’s take on things such as the chronology of the Holmes cases. However, he is also well versed in the works of other Sherlockian’s (or Holmesian’s) such as Baring-Gould, Bunson and Blakeney and is willing to vary his own conclusions from that of Dankin as evidence is presented.

Mr. Duncan also presents a review of the major actors who have played Holmes. He does an admirable job critiquing such players as Rathbone, Brett, Wontner and Richardson. I especially found myself agreeing with his take on Frewer! This book was written before the latest addition to the movie Holmses with Downey; I’m really curious how Mr. Duncan would rate the latest actor to play Sherlock?

All in all, a good, easy read well worth adding to your beginning Holmes reference library.

“Close to Holmes” by Alistair Duncan is an adjunct to his earlier work “Eliminate the Impossible” which is an excellent reference into the Holmes Canon. Close to Holmes takes the reader through the streets of both Holmes’ and Doyle’s London. So it’s best to take out your London map and follow along. Where was 221 Baker Street? How about the Northumberland Hotel where Henry Baskerville stayed? Or maybe you’re curious about all those railroad stations that Holmes and Watson were using to run off on their adventure? Mr. Duncan not only helps the search for these Sherlockian locations, he gives insight into the area and the era.Filled with an educated assessment of where the real locations are, Mr. Duncan also provides a vast array of photographic material. He shows the locations as they were and for the armchair traveler, how they appear today. Mr. Duncan takes the reader on a tour that is second only to being there.
Mr. Duncan does not limit himself to the areas close to Baker Street but also takes the reader to Norwood where a number of Holmes Stories occur (most notably The Sign of Four). If you have read Mr. Duncan’s “Eliminate the Impossible” you will also enjoy this volume. Well worth the read. It is obvious that Mr. Duncan knows not only Holmes but Doyle and London. 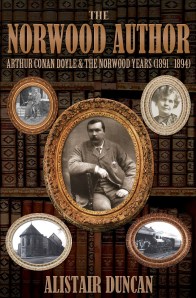 Mr. Duncan does an exceptional job of presenting Dr. Doyle in his day to day endeavors as a member of the local cricket club (for whom he did very well) as well as the Upper Norwood Literary and Scientific Society. Mr. Duncan also discusses Doyle’s other activities such as his writing for the magazine the Idler and just why did Doyle kill off Holmes in a way that he could return.

Mr. Duncan makes this volume one that deals with gaining an understanding of the man Doyle himself. It would indeed be interesting to have such an in depth biography of the man in his other locals. As in his last work Mr. Duncan provides numerous pictures of the area where Doyle lived and worked. This is indeed a work well researched.

by Alistair Duncan is an extensive, in depth look at the life of Sir Arthur Conan Doyle during the years 1891 to 1894 when he was a resident of South Norwood. Holmes fans are familiar with Doyle’s use of the local in his stories. This is the third volume from the pen of Mr. Duncan on the subject of Holmes and Dr. Doyle.