The Many Watsons – Reginald Owen 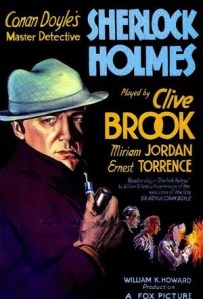 Sherlock Holmes, the 1932 film, starred Clive Brook as the immortal detective. If you can believe it, Holmes is about to get married and move to a chicken ranch! This is definitely an updated movie, since Holmes would have been in his late 70’s by 1932. But you know that Holmes can’t retire to that chicken ranch yet. Prof. Moriarty has escaped from jail and has sworn to kill Holmes, the prosecutor, the judge and the Scotland Yard detective that sent him to prison. Holmes, of course, had promised to give up chasing crooks but with Moriarty on the loose again must re-enter the fray.

The language is more 1930’s than late 19th Century and Moriarty has imported a grenade pitching Chicago gangster to help him out. Brook is good but not really “Holmes”. Ernest Torrence is the professor and is excellent in the part. Miriam Jordan is Holmes paramour Alice Faulkner and Reginald Owen plays the part of Dr. Watson. Unfortunately Owen doesn’t have a large part to play in the movie but is a reliable and intelligent Watson. Brook uses a number of disguises including that of an aging old aunt and a workman. All in all, this is a film really worth watching but perhaps you should put your mind in the mode of “I’m going to watch a crime thriller” instead of “I’m going to watch a Sherlock Holmes Film”. In fact, it almost has an early film noir atmosphere to it. The dialogue is good, there is action and the film flows quickly. (Moriarty is a bit dense when it comes to Holmes’ disguises.)

This is another one of those films that would never work in color. The black and white silhouettes of Moriarty in the opening scenes just wouldn’t be as good in another format. (Think about the closing scenes of the Maltese Falcon, the elevator gate just won’t work in color.)

Reginald Owen is immediately recognizable to millions of old movie buffs. He was born John Reginald Owen in Hertfordshire, England on 5 August 1887 and died of a heart attack on 5 November 1972. Owen appeared in 80 feature length films and had a total of 143 film and TV performances. Owen made his stage debut in England in 1905 but was performing on Broadway by 1924. In 1929 Owen made the leap to Hollywood and became one of the best known character actors of the 20th Century.

Owen had two very great distinctions as a film actor. He was perhaps the best known of all Scrooges, starring in the role in the 1938 classic “A Christmas Carol” and more importantly for us; he is one of only four actors to play both Holmes and Watson. He starred as Holes in the 1933 movie “A Study in Scarlet”, with Warburton Gamble as Watson. The other three actors to play both roles were Jeremy Brett, Carleton Hobbs and Patrick Macnee.

This entry was posted in Doyle, Holmes, Watson and tagged Reginald Owen. Bookmark the permalink.