How to Write a Murder Mystery

This blog is about neither Watson nor Holmes. In perusing my collection of mysteries I was rereading some of my favorite Philo Vance stories and came across the rules of the game as proposed by S.S. Van Dine (actual name Willard Huntington Wright). I thought I might share them. So this is for all the aspiring mystery writers out there.  S.S. Van Dine was the creator of detective Philo Vance. Below you will find his 20 rules for writing a detective story. (I admit I have edited it a bit by condensing some paragraphs.) 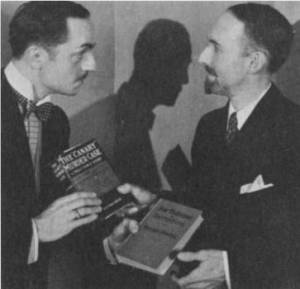 All old time movie fans will be familiar with Philo. Ten different actors would play Philo over the years but the best was undoubtedly William Powell and the best film the Kennel Murder Case. Warren William was second best.  (And the Gracie Allen Murder Case is a good rainy afternoon comedy.)

The detective story is a kind of intellectual game. It is more – it is a sporting event. And the author must play fair with the reader. He can no more resort to trickeries and deceptions and still retain his honesty than if he cheated in a bridge game. He must outwit the reader, and hold the readers interest, through sheer ingenuity. For the writing of detective stories there are very definite laws – unwritten, perhaps, but none the less binding: and every respectable and self-respecting concocter of literary mystery lives up to them.

Herewith, then, is a sort of Credo, based partly on the practice of all the great writers of detective stories, and partly on the promptings of the honest author’s inner conscience. To wit:

a. Determining the identity of the culprit by the brand of a cigarette butt.

b. Bogus spiritualistic séance to frighten the culprit

e. The dog that does not bark in the night.

f.The final pinning of the crime on a twin or look alike.

g. The hypodermic syringe and the knock-out drops.

h. The commission of the murder in a locked room after the police have actually broken in.

i. The word association test for guilt.

j. The cipher, or code letter, which is eventually unraveled by the sleuth.

Hope you find Wrights comments useful. I think they are definitely worth pondering

1 Response to How to Write a Murder Mystery