The Many Watsons – Peter Sallis

A recent post in the Blog Better Holmes and Gardens (which I highly recommend) reminded me of a wonderful evening I had when I was 16 years old. It was 1965 and one of the benefits of being a native New Yorker was access to the shows on Broadway. I couldn’t wait to see this particular one: Baker Street the Musical. It was GREAT! At least I thought so. I still have the LP record of the show and dragged it out and played both sides. Probably been 10 years since I listened to it and it is stillgreat! Baker Street took the 1965 Tony Award for  Best Scenic Design, and nominations for Best Actress in a Musical – Inga Swenson, Best Costume Design and Best Author. The play ran about one year.

Baker Street was written by Jerome Coopersmith and stared: Fritz Weaver as Holmes, Peter Sallis as Watson, Inga Swenson as Irene Adler and Martin Gabel as Moriarty. The play was only two acts but had 16 scenes, lots of set changes, dancing and some memorable songs. I still remembered the words to “Jewelry”.

The plot is kind of convoluted. It is a cross between A Scandal in Bohemia, The Empty House, The Final Problem and the Rathbone, The Adventures of Sherlock Holmes. In fact the first and last stories contribute the most to the story line. Short Version: Holmes saves himself from assassination, soldier asks help getting back letter, meets Adler, becomes partners with Adler to trap Moriarty, gets captured by same, Irregulars save him, fights Moriarty on cliffs of Dover, Moriarty dies, Holmes recovers Crown Jewels formerly stolen by Moriarty. 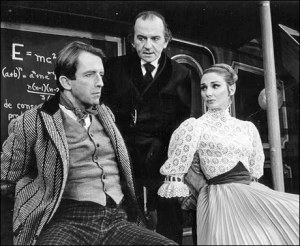 The singing was very well done and Peter Sallis (Watson) received acclaim as having the best song in the show, “A Married Man” where he sings about his preference for the married state. Personally I liked “It’s So Simple” sung by the client, Holmes, Watson and Lestrade. The song is about Holmes’s ability to make deductions. The other two memorable songs are: “I Shall Miss You”, where Moriarty leaves Holmes and Watson tied up sitting with a bomb; and “Jewelry”, where Moriarty’s gang is singing and dancing as they divide up the loot. (just before being captured).

Peter Sallis was wonderful as Watson and was quite a sympathetic character. In case you can’t tell I had a great time that night.

The Original cast album is still available on Amazon. (In case you still have your Hi-Fi and turntable like I do.) You might want to know though that the cast album includes one song that was not in the play after opening night, “I’m in London Again” which is Irene’s first song. On the second night it was changed to “Buffalo Belle”, which was a Wild West number.

The list of Peter Sallis’s film and TV credits runs for almost nine pages. That doesn’t include the legitimate theater credits from London and Broadway. Sallis was born 1 February 1921 in Twickenham, England. Sallis was an only child and after completing grammar school went into the banking business. As with so many others, WWII came along and Sallis served in the RAF as a ground radio operator eventually becoming an instructor. While he was an instructor he became involved in amateur theater and his life was changed. By 1946 he was in his first stage play and in 1947 he was on TV in the UK. Between 1947 and 2010 Sallis would gain 141 screen credits. During the 1950’s and 1960’s he was in constant demand in London and on Broadway for his live theater skills.

Sallis is probably best known for his role as Norman Clegg on the TV show “The Last of the Summer Wine” and for doing the voice of Wallace on the “Wallace and Gromit” TV shows and film.

Sallis is married to his wife Elaine Usher since 1957 and has one son, Timothy Crispian. Sallis was awarded the O.B.E. (Officer of the Order of the British Empire) in the Queen’s Birthday Honours List in 2007 for his contributions to the dramatic arts.