The Many Watsons – Melville Cooper

The Adventure of the Speckled Band was a 30 minute TV show in the early days of television. It showed on 4 April 1949 as a part of the Lucky Strike sponsored “Your Show Time”, a series of half hour stories told by “the old bookseller”, Arthur Shields. Each week would be a new story though there can be little doubt that a successful story might lead to a series. You’ll remember Arthur Shields as the ubiquitous Irishman of 30’s and 40’s movies and one of John Fords favorites.

Cooper as the Sheriff

For the time (early TV), and considering the time constraint, it wasn’t a bad attempt at the story. Alan Napier played the part of Holmes and does a workman like job but that’s kind of the problem. He was a good actor but there wasn’t any spirit in the character. He lacks enthusiasm for the part and Holmes is played very flat. (If that makes sense.) Napier is best remembered for playing Alfred, Batman’s butler, in the 1966 TV series.

Melville Cooper plays the part of Dr. Watson, and unfortunately he plays Watson as the buffoon. It is almost sad. It must have been tough playing Holmes and Watson when Rathbone and Bruce had only recently stopped making movies and were still occasionally on the radio. But the added interplay between Cooper and the monkey just doesn’t add to the story. (I know what you’re thinking, “the monkey?” Now you have to see it, right?) The TV show is available as a free download on the internet. It is an enjoyable enough half
hour and the still extant commercial almost made me want to pick up smoking again. (Almost) LSMFT! 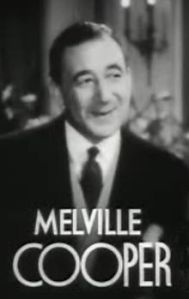 Melville Cooper was born George Melville Cooper 15 October 1896 in Birmingham, England. By 1914 he made his first appearance on the stage at Stratford-on-Avon, but then came the Great War. During WWI he served with the Seaforth Highlanders was wounded, taken prisoner and rose to the rank of lieutenant. When the war ended he went straight back to acting and had a rising career in the theater. In 1930 Cooper turned to the movies
starting with a short film called “All Riot on the Western Front.” He next stared as Inspector Jap in the Agatha Christie film adaptation of “Black Coffee”. He would continue in the movies in the 1930’s and ‘40’s with such films as “The Scarlet Pimpernel”, “Murder Over New York” (Charlie Chan film), “Dawn Patrol” and probably most famously as the Sheriff of Nottingham in “Robin Hood”.

Cooper moved on to TV in the late ‘40’s and into the early 1960’s. He was a frequent guest star on such shows as Shirley Temple Theater, Alfred Hitchcock Presents, Kraft Theater, and Broadway Television Theater. He was also one of the original panelists on “I’ve Got A Secret”. All the time he was acting on television he was also busy on the Broadway stage.

Cooper was married three times and had one daughter. He died of cancer on 31 March 1973.