The Many Watsons – Heinz Ruhmann 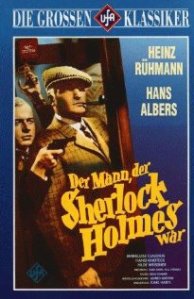 It is somehow appropriate that I write this while sitting in the Dusseldorf airport because it is about a German actor and one of the best of the first part of the 20th century. Heinz Ruhmann played Watson only one time and that was in the movie “Two Merry Adventurers”, at least that was what it was called in the US in 1937. In Germany it was called “Der Mann, der Sherlock Holmes War” (The Man Who Was Sherlock Holmes).

In the story Hans Albers (who plays Sherlock) and Heinz Ruhmann (Watson) aren’t our two heroes at all but two con men who impersonate Holmes and Watson. Curious too is that the names Holmes and Watson are never spoken in the movie. It’s part of the plot. If they never say the names but let people assume who they are they haven’t committed a crime. They do dress as our heroes and let people assume what they want.  There is a romantic involvement with two English girls and somehow manage to stop a gang of counterfeiters. They also recover a priceless stamp collection which they would love to keep but return. Our two impersonators are arrested and charged with pretending to be Holmes and Watson and the trial includes an appearance by an unhappy Conan Doyle played by Paul Bildt. Of course since they never said who they were nothing can be proven
and they are released to continue pursuing their love interests.

The movie is really quite an entertaining comedy. It is hard to run down. It was put out on VHS years ago but I haven’t been able to find a region 1 DVD yet. Curious note – this was one of the two films found in Adolf Hitler’s bunker after the war. The other was “Der Hund Von Baskerville”. Strange that he should have two films about an English hero. 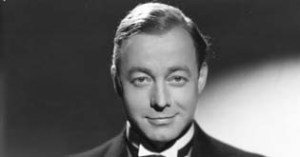 Heinz Ruhmann was born 7 March 1902 in Essen Germany and died 3 October 1994 in Bavaria. At the time of his death he had 111 films to his credit and was active on TV up until his death at the age of 92, an astounding feat. He grew up in Wanne-Eickel and Munich. He never graduated from secondary school but by 1920 he had started his acting career on the stage in Breslau, Hanover, Bremen and Munich. He made his first movie in 1926 and made the transition from silent to talking films in 1930. He had an exceptional speaking voice which many in the silent era did not. He co-starred with Hans Albers on a number of occasions, playing street smart characters that eventually get their comeuppance. By 1938 Ruhmann was producing his own films and playing on the Berlin stage.

There is no evidence that Ruhmann was a party member but just a good actor who was much in demand.  In fact, Anne Frank was a big fan and had Ruhmann’s picture above her
bed in the secret rooms she shared with her family in Amsterdam. 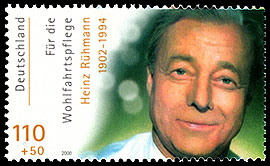 How many Watsons have a stamp?

Ruhmann received more awards than I have space for. Some of the honors that make him stand out though are the honors from the citizenry: A Berlin district issued a coin with his image, a street in the Bavarian town of Berg named a street in his honor, and he was ranked number one in a survey by the ZDF network as Germany’s all-time favorite actor. In addition he received 25 major awards

Ruhmann was married 3 times. He was divorced once and widowed once. He had one son Peter Ruhman.

2 Responses to The Many Watsons – Heinz Ruhmann